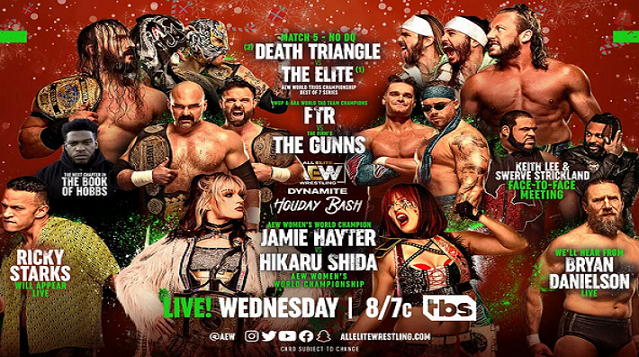 Tonight’s episode of Dynamite features the fifth match in the best-of-seven series between Death Triangle and The Elite for the AEW world trios titles. PAC and the Lucha Bros currently have a 3-1 lead in the series over Kenny Omega and the Young Bucks. The champs only need one more victory to win the series and retain the belts.

Death Triangle has illegally used a hammer to assist all three of their victories against The Elite up to this point. As a result, Kenny Omega requested a No Disqualification match for tonight.

Just as we’ve seen in the first four matches of the series, there is a high probability that these six men will do incredible things in the ring and have another great match. The only downside is that the outcome of the fight seems extremely predictable for two reasons:

Stipulations for Match 6 and Match 7 in the series have already been announced, and it’s hard to believe that AEW won’t deliver on a potential ladder match for Match 7 in Los Angeles on Jan. 11.
Tony Khan recently secured the rights to use the Roundball Rock song to promote this series, so he’s going to get his money’s worth by pushing it to the brink of seven matches.