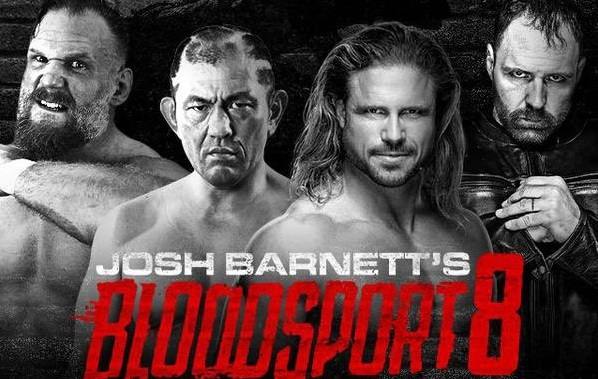 Having seen Ninja Mack flip around Germany earlier this month, I’m very curious to see how the former Shotgun champion does here. He unmasks before the match, and it really is one of those deals “he’s not how I imagined…”

Yoya tried to go for Ninja Mack early, but got thrown down as the pair then went for a tie-up, but to no avail. A cravat from Mack’s kicked away, as Yoya connected with a kick, taking Mack down as some hammer fists nearly stopped it. Mack holds on as they reset, before he threw himself and Yoya outside to try and break a rear naked choke.

Yoya beats the count-out as Mack was putting the blood into Bloodsport, having been busted up. A belly-to-belly takedown has Yoya down as Mack flipped around… and got pulled into a triangle armbar, only to lift his way free. Things nearly went awry as Yoya was thrown up.

fter a powder to the outside, Yoya stings Mack with more kicks, before knee strikes rocked the “Shooterweight.” Yoya replies with a suplex, then an ankle lock as he countered a takedown. Mack kicks it free though, only for Yoya to pick him up and charge the pair off the ring to the floor. Bloody hell, lads! Returning to the ring, a single leg crab traps Mack, but he powers out, then cracked Yoya with a spinning kick to cause the TKO. They’re getting these goddamn finishers going here, as Mack edged the win here.