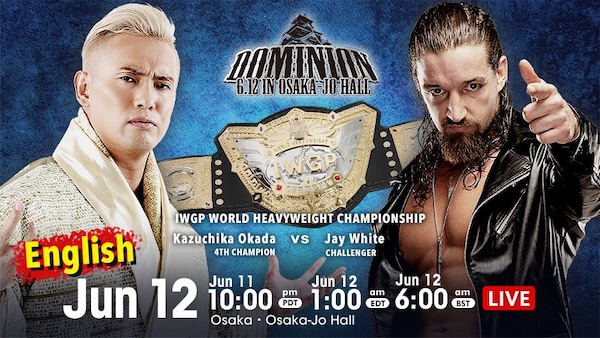 O-Khan and Owens started the match, with O-Khan outwrestling the wily “Crown Jewel.” Both teams go back and forth, with Cobb stopping Owens from pinning O-Khan with his feet on the ropes, like Owens did at Capital Collision. Eventually Cobb and Fale squared off, leading to the massive Hawaiian bodyslamming the Tongan giant.

Bullet Club took control and double teamed Cobb. Cobb fought back valiantly but nearly fell to a Jewel Heist from Owens. O-Khan defended his partner with wild strikes but got flattened by Fale.

Owens was unable to capitalize on a series of C-Triggers, leading to O-Khan and Cobb to come back and dismantle the champions. O-Khan threw Owens across the ring and then Cobb crushed Owens with Tour of the Islands for the pinfall in 10:54.

Goto took control early, after a steady feeling out process. They eventually fought to the outside, where Goto maintained the attack. Goto fought Tanahashi back into the ring, where both men started exchanging strikes and suplexes.

Tanahashi managed to come back with a Slingblade, but Goto came back with a Hangman GTR, as well as a rollup for a nearfall. Tanahashi persevered. Goto tried to get the better of Tanahashi but ended up eating another Slingblade. Tanahashi hit Aces High and then followed up with a High Fly Flow for the pinfall in 12:30.