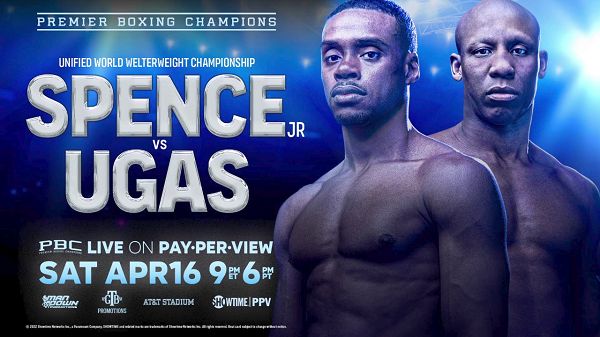 IBF and WBC welterweight champion Errol “The Truth” Spence Jr. showed his greatness against WBA champion Yordenis Ugás, battling back from early adversity to stop Ugás in the tenth round on SHOWTIME PPV live from AT&T Stadium in Arlington, Texas headlining a Premier Boxing Champions event before an announced crowd of 39,946.

Spence had to overcome some harsh conditions courtesy of Ugás to get to this point. After Ugás hurt Spence in the sixth, knocking his mouthpiece out with an uppercut, Spence of DeSoto, Texas, stormed back to hurt Ugás repeatedly to the body and eye. By the tenth round, Ugás’ right eye was completely shut when referee Laurence Cole stopped the contest for the second time to allow the ringside physician to inspect the damage.

Unlike earlier, the doctor advised Cole to stop the bout at 1:44 of the tenth round, giving Spence (28-0, 22 KOs) a resounding victory, a third welterweight belt, and perhaps the greatest triumph of his still accumulating career following a 17-month layoff after corrective surgery to his left eye forced him to pull out of a mega-fight with Manny Pacquiao. Ugás stepped in for Spence on late notice, beating and retiring Pacquiao last summer, setting the stage for Saturday’s welterweight unification contest, just the 12th in the division’s history.