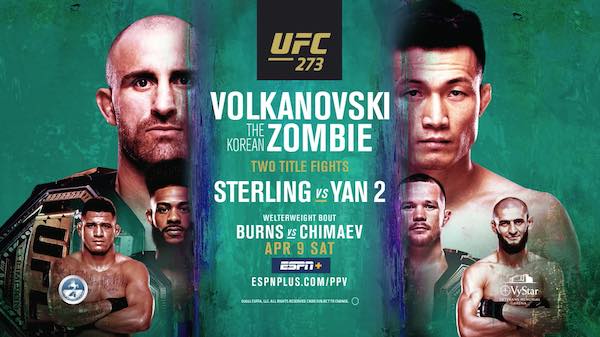 Alexander Volkanovski made an emphatic statement at UFC 273, loudly proclaiming his place as the world’s best featherweight.

Aljamain Sterling returned to the Octagon after a 13-month absence, conquering Petr Yan to crown himself the undisputed bantamweight champion.

And Khamzat Chimaev kept his undefeated streak alive with a unanimous decision victory. But it came at a price, as Chimaev no longer resembled the unstoppable juggernaut he had been in his prior 10 victories as he was forced to overcome all sorts of adversity against Gilbert Burns.

The 273 pay-per-view was full of highlights, but no performance was more one-sided than the main event. Volkanovski (24–1) collected his 21st victory in a row, defeating “The Korean Zombie” Chan Sung Jung (17–7) after referee Herb Dean mercifully stopped the fight in the fourth round. More than collect another win, Volkanovski may have ended Zombie’s career with that convincing victory. Right now, Volkanovski has no peers in the division.

The co-main event was full of tension, and ended in redemption for Aljamain Sterling. Powered by two dominant rounds, Sterling (21–3) slayed his greatest rival, Petr Yan (16–3), in a bantamweight title unification bout. Sterling was nearly perfect in the execution of his game plan. Every time Sterling took a shot, he continued to force Yan to fight a wrestling-based style. That clearly favored Sterling, and his unrelenting, determined approach paid dividends for Sterling, whose 13-month absence from the Octagon ended in storybook fashion.