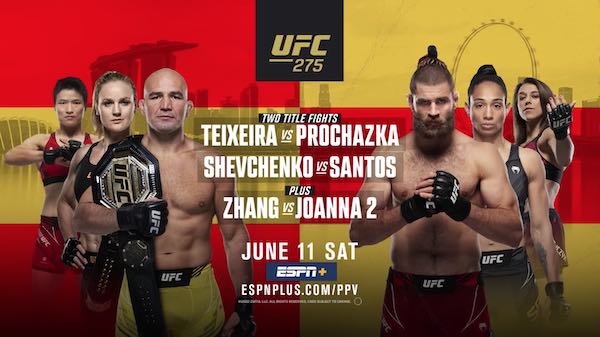 While most would agree Glover Teixeira and Valentina Shevchenko generate some of the lowest levels of buzz amongst the reigning champions, I don’t think anyone is going to argue putting them on the same card creates a strong enough one-two punch to justify them at the top of a PPV. However, upon closer inspection from my end, I ended up growing more excited about UFC 275. In terms of straight physical gifts, Taila Santos appears to be the most difficult challenge for Shevchenko during her reign and how often are we going to continue to doubt Glover Teixeira? I understand why Jiri Prochazka is the favorite, but wasn’t Teixeira the underdog in his previous three contests as well? Hell, the three fights previous that were basically pick ‘em odds. Teixeira got his hand raised each of the last six times. I’m not proclaiming the event will be on the level of an MSG PPV, but it sure as hell pulls its weight.

A lot of it has to do with favorable matchups for the Brazilian. That isn’t intended to be a knock on Teixeira; everyone who has ever grabbed the belt has had lucky bounces go their way as you don’t win the title without that. But prior to beginning his current winning streak, Teixeira was losing on a consistent basis to fighters who have been able to outwrestle him. Even during this streak, he struggled against fighters with a wrestling background in Ion Cutelaba and Nikita Krylov. Teixeira struggled to get both of them down, needing a stoppage when it looked like he was on his way to lose to Cutelaba and eeking out a split over Krylov. Everyone else in that run has been considered an average defensive wrestler at best. Prochazka’s takedown defense isn’t porous, but it sure is a question mark at this level.