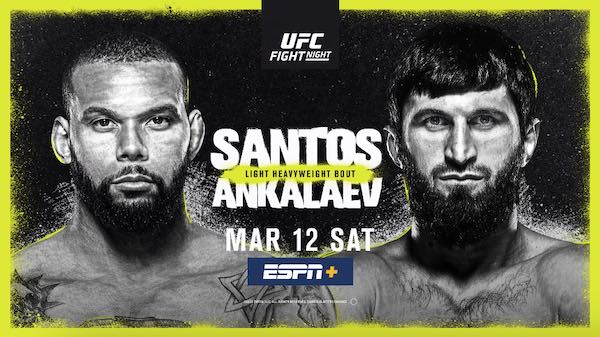 Magomed Ankalaev is widely viewed as a future champion in the UFC’s light heavyweight division. Prior to tonight, he’d never participated in a main event and been forced to fight a five round bout. Tonight, he put all questions about whether or not he held the conditioning to go five rounds to bed. Tonight’s edition of Fight Night from the Apex Center featured exciting finishes mixed in with grueling tests of endurance that went the distance. There’s a lot to unpack here. Without further ado, let’s get into it!
Santos vs. Ankalaev

Thiago Santos is a heavy hitter and one of the most dangerous men in the light heavyweight division. Magomed Ankalaev is seen as a rising prospect who is on the short list of contenders worthy of a title shot. Both men came into the octagon with a great deal of respect for the other’s reputation. In round one, they were both hesitant to engage in offense, opting for a defensive minded strategy. In the second interval, the action picked up, with Santos sending Ankalaev to the mat with an overhand right late in the round.