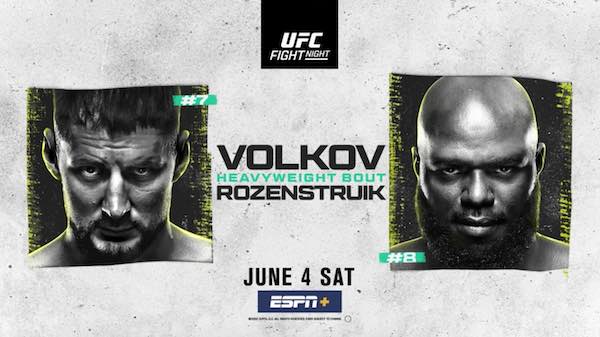 UFC Fight Night 207 is headlined by two heavyweights in Alexander Volkov and Jairzinho Rozenstruik looking to find some answers and create momentum in the UFC’s APEX Facility in Las Vegas.

Both Volkov and Rozenstruik are top-10 talents in the division of big men, but both could find themselves on the fringe of that distinction if they don’t start winning more fights.

Volkov, like Rozenstruik, has lost two of his last three fights. Most recently, we saw him lose by first-round submission to rising star Tom Aspinall.

In Rozenstruik’s last time out, he was outclassed by Curtis Blaydes, losing a clean sweep unanimous decision.

Now, the two will see each other in a five-round main event with a chance at getting something going.

Here’s a look at the complete card, with a focus on the biggest fights scheduled for the afternoon.

The heavyweight clash is going to be all about space. Rozenstruik wants to eliminate it, while Volkov thrives in it.

The 6’7″ Russian has an 80-inch reach and knows how to use it. He looks to keep opponents on the end of his jab while sprinkling in kicks to the body and legs to outpoint his foes on the cards.

It’s an effective strategy and not one that gets utilized often in the division.

Rozenstruik is the typical heavyweight striker. He can be plodding and monotonous, but when he connects, it’s with bad intentions. “Bigi Boy” has earned 11 of his 12 wins by knockout, including every win under the UFC banner.