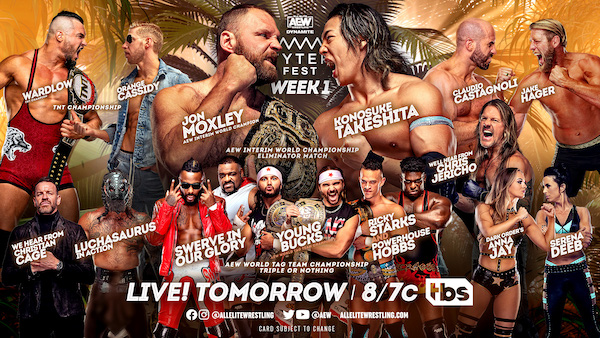 Several matches are announced for the show including a three-way match for AEW World Tag Team Championship.

After an argument between Swerve in the Glory and Team Taz, AEW World Tag Team Champions The Young Bucks interrupted them to say that both teams failed to defeat Jurrasic Express at Double or Nothing, which they easily did at Road Rager. They went on to raise the stakes and announced a Triple or Nothing match to defend the title against both teams.

Claudio Castagnoli has two significant wins in his first two matches as he first defeated Zack Sabre Jr. at Forbidden Door before winning the Blood & Guts match for this team. In a rare moment, Jake Hager cut a promo against Claudio and challenged him to a match for next week’s Fyter Fest Dynamite special. Additionally, Hager’s stable leader Chris Jericho will also appear live for a promo.

In other segments, Christian Cage will be appearing live for another promo for the fourth week in a row. Also, his apprentice Luchasaurus will be in action in the ring. Anna Jay will take on Serena Deeb in a singles match.

Tony Khan has added two more matches to the card later. Jon Moxley will take on Konosuke Takeshita after being impressed by Takeshita’s performance against Eddie Kingston last week at Rampage. Also, Wardlow will defend the TNT title for the first time against Orange Cassidy. Cassidy had defeated Ethan Page and Tony Nese in the last two weeks.