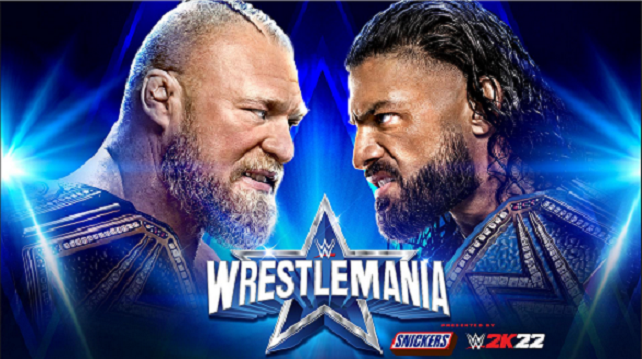 Roman Reigns vs. Brock Lesnar for the Unified WWE World Heavyweight Championship of the Universe: For every flaw this WrestleMania build might have had, this match has been expertly built. Roman Reigns is the unbeatable monster heel. Brock Lesnar is the unbeatable monster babyface. These two are doing some of their best work ever and have me anticipating a WrestleMania main event I was tired of four years ago.

Roman Reigns comes into this match having been elevated above literally everyone on WWE’s roster. He continues to dominate as Universal Champion and, should he win this match, one has to wonder what he does next. Does WWE keep him in this championship position hoping for a match with The Rock in 2023? Do they have enough fresh matches for Reigns to keep him going for that long?

Reigns is on the run of his career. He ended last year’s WrestleMania by smashing and stacking “Daniel” Bryan Danielson and Edge. At this point, it feels like Reigns must show a little weakness to keep it interesting. I want to see Reigns fight for more than the title. I want to see Reigns actually angry and out for revenge.

At the same time, Brock Lesnar is as interesting as he has ever been in the decade since his WWE return. While I originally believed this was the moment to crown Reigns, I now believe this is the moment to stretch it out.